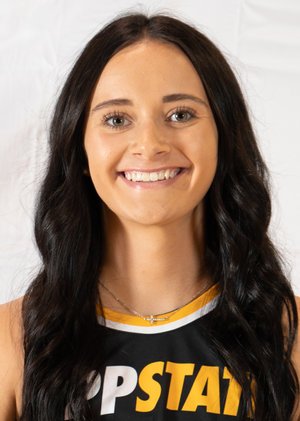 The App State women’s basketball team clashed with Southern Miss on Thursday for the first time in conference play, falling to the Lady Eagles, 75-68.

“All week long we talked about protecting the house and went into battle in the paint and I thought Southern Miss was a very good team, a very well coached team. They exploited us with number 45, she was able to have 26 points and 15 rebounds, and 42 points in the paint to our 26 was just a difference maker,” said head coach Angel Elderkin.

“I was disappointed in our defense. We tried multiple options and it just seemed like they had an answer for everything. I think they did a really nice job executing. But I was proud of my team for not giving up and I thought in the fourth quarter we definitely made a run and could have had a chance to come out on the other side of this one. But hopefully there’s a lesson to be learned from it.”

App State scored 20 points off turnovers, 26 in the paint, and 11 from fast breaks.

Carver was responsible for 13 of App State’s 19 points in the first quarter, drilling 3-of-4 treys and 5-of-6 field goals. In addition to a trey and free throw from Alston and a layup from Sanders, the Mountaineers stayed within one of the Lady Eagles, trailing 20-19 at the end of the quarter.

Carver opened the second quarter with another trey to tie things at 22 all, and a 3-point bucket from redshirt junior A’Lea Gilbert gave App State a 25-22 edge. Gilbert, Sanders, and Carver each made layups, keeping within two of Southern Miss’ 33-31 lead at the half.

Sanders opened the third quarter with a pair of free throws and Carver sunk another trey to bring App State within three (39-36). A trey from Alston and layup from Sanders cut into the Lady Eagles’ lead, but a scoring drought from the Black and Gold and an 8-0 run from Southern Miss left App State trailing 53-41 at the end of the quarter.

In the fourth and final quarter, a layup and pair of free throws from Sanders and a three-point play from Gilbert cut Southern Miss’ lead to 60-50. Alston cut the deficit to 63-56 with a back-to-back layup and jumper. A crucial trey from Carver put App State back within one (63-62), but the Lady Eagles pulled ahead to 75-68 for the victory.

The Mountaineers will host Coastal Carolina on Saturday at 2 p.m.