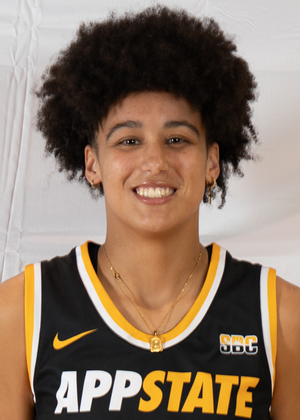 Junior Faith Alston led the Black and Gold, scoring a team-high 10 points, which also tied her season high. Alston went 4-for-4 from the charity stripe and notched two rebounds, two assists and two steals. Off the bench, sophomore Zada Porter had the second-most points (9) and went 3-for-3 from the free throw line. The Roanoke, Va. native also pulled down six rebounds and dished out two assists. Redshirt junior A’Lea Gilbert and graduate student Lauren Carter tied for a team-high seven rebounds each. The Black and Gold recorded 29 points off the bench.

“Like I shared with the team after the game, I’m very optimistic. I think we’ve had a tough stretch of games and I think in all of our games we’ve learned something and we’ve grown. That’s really the objective of our non-conference schedule,” said head coach Angel Elderkin.

WVU jumped to an early 6-0 lead in the first quarter. A jumper and free throw from Porter brought App State within one (8-7). West Virginia’s Savannah Samuel drained a 3-pointer, which Gilbert promptly answered with a 3-pointer of her own to keep the Black and Gold within one (11-10). Another WVU three extended the gap to 14-10. Freshman Alexis Black made a jumper to close out the quarter, putting App State within two at 14-12.

West Virginia built off its momentum for the remainder of the game, creating a deficit App State couldn’t recover from. WVU’s Kylee Blacksten, Madisen Smith and Jayla Hemingway combined for 42 of the Old Gold and Blue’s points.

App State will host Davidson on Sunday at 2 p.m.