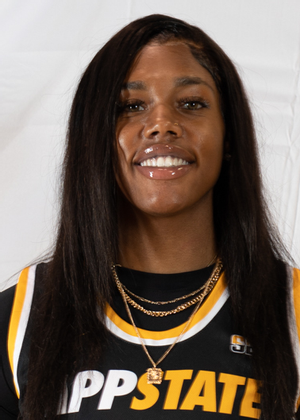 The App State women’s basketball team fell 77-49 to No. 19 Michigan in Ann Arbor on Saturday to close out its final nonconference road trip of the year.

Saturday’s game was App State’s second against a “Power Five” opponent on the road this season, as it had clashed with West Virginia on Nov. 20.

Gilbert started off strong for the Mountaineers, sinking her first three shot attempts in the first quarter as App State held Michigan to a 19-15 lead. The Wolverines (10-1) extended their lead in the second quarter, jumping ahead 40-25. Redshirt sophomore Summer Schloss posted her first points of the season with a layup for the Mountaineers to close out the quarter.

In the third quarter, Black sunk 4-of-4 free throws, adding to the two she had tallied in the first quarter. App State fought to cut into Michigan’s lead, but it wasn’t enough as a steal and jumper from freshman Chaé Harris capped the game with Michigan up 77-49.

The Mountaineers will host Gardner-Webb on Dec. 20 at 2 p.m. for their Ugly Sweater Game and final nonconference matchup.

App State opens Sun Belt play on Dec. 29 and 31, welcoming new league members Old Dominion and Marshall to the High Country. The Mountaineers will host ODU on Thursday, Dec. 29 at 6:30 p.m. Fans can enter to win prizes in the ‘What You Didn’t Get for the Holidays’ event. For New Year’s Eve, fans can get discounted tickets to the Mountaineers’ 2 p.m. game against Marshall.