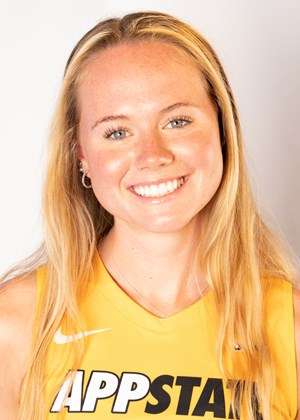 Madison Baldridge had a total of 25 kills in the two App wins.
photo courtesy of Appalachian State Athletics

The App State volleyball team opened play at the Wofford Tournament on Friday, kicking things off with a morning win over USC – Upstate, 3-1. In the evening match, the Mountaineers defeated Wofford after a five-set battle, coming out on top, 3-2.

The Mountaineers (3-2) continue play at the tournament on Saturday, facing Eastern Kentucky at 11 a.m. Live stats will be available and the match will be broadcasted on ESPN+.

“It’s always a great day when you can manage to walk away with two wins,” said head coach Sarah Rumely Noble. “I’m super proud of my team and the way we executed in the fifth set [against Wofford] tonight. We’ll be back at it for one more tomorrow.”

App State 3, USC – Upstate 1
Junior Madison Baldridge led the team in kills, racking up 13, with senior McCall Denny and freshman Maya Winterhoff following behind with 10 each. Junior Sophie Cain recorded her second double-double of the season, leading the team in assists (21) and notching 13 digs. Freshman Kenady Roper continues her strong debut for the Mountaineers, leading the team in digs, tallying 17.

App State outpaced USC – Upstate in all categories throughout the match, with the largest leads in aces (10-3) and digs (55-49).

App State held a commanding lead in the first set, immediately jumping out to a 6-0 lead. Maintaining their lead through the first set, the Mountaineers posted two more 4-point runs and clinched the first set 25-17.

The Mountaineers led for the entirety of the second set as well. Posting four unanswered points early, with kills from junior Cierra Huntley and Winterhoff and two errors from the Spartans, App State took the lead, 9-5. Nearing the end of the set, senior Sam Bickley and sophomore Lulu Ambrose registered kills and Roper earned a service ace to put the Black and Gold up 20-12. Denny and Winterhoff capped the set, 25-16, after a kill and service ace.

USC-Upstate fought back in the third set, coming out fast to take the first point. The Mountaineers and Spartans went point for point after tying 13-13. The Spartans’ largest lead in the match was a mere four points, but was enough of a push past the Mountaineers, 25-23.

In the fourth and final set, App State bounced back, kicking things off with back-to-back kills from Baldridge and Denny. The Mountaineers built off two more four-point runs, which included a solo block from senior Sarah Missroon, a kill from Ambrose, a block from Missroon and Ambrose combined, as well as two service aces from Roper. Leaping to a lead of 14-5, the Mountaineers regained their momentum from the first two sets, pushing the score to 19-9. Down by ten, the Spartans attempted a comeback, but the Black and Gold’s drive carried them to a 25-19 win to clinch the match overall three sets to one.

App State 3, Wofford 2,
Baldridge led the Mountaineers in kills against the Terriers, notching 12. Denny recorded a double-double after finishing the match second on the team in kills (11) and digs (14). Leading the team in assists was Cain (25), followed by senior Sam Bickley (18). Roper notched 24 digs, three assists, and four aces on the night. Winterhoff led the charge in the aces and blocks categories, tallying five aces and four blocks on the night.

The Mountaineers led Wofford in aces, notching 10 compared to the Terriers’ five.

Wofford maintained a steady lead in the first set, downing App State, 25-20, despite the Mountaineers’ late comeback. The Mountaineers sprung into action in the second set, matching Wofford point-for-point before earning six unanswered points that included kills from Baldridge, Cain, and Dombrowski, as well as two service aces from Winterhoff, to rise from a two-point deficit to take the lead 24-20. A kill from Denny clinched the second set, 25-22, for the Mountaineers.

App State’s momentum carried into another back-and-fourth third set. The Mountaineers posted a four-point streak that included two kills from Baldridge and two aces from Winterhoff to push the score to 22-17. In reply, Wofford earned five points to tie the score at 22 all, but the Mountaineers captured the set, 25-23.

Wofford forced a fifth set after steadily leading and winning the fourth, 25-18. The Black and Gold came out strong in the fifth, taking a 7-3 lead early and extending their lead from 10-5 to 14-5 with back-to-back aces from Roper, an attack error from Wofford, and a kill from junior Meghan Dombrowski. The Mountaineers won the set, 15-7, to clinch the match 3-2.