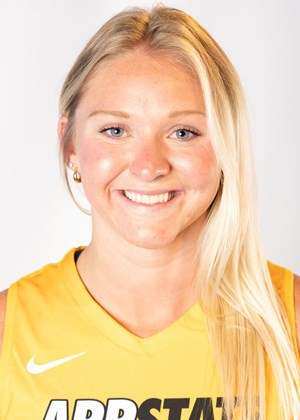 “I’m incredibly proud of my team,” said head coach Sarah Rumely Noble. “Today’s match was gritty and we played our brand of volleyball. It’s always hard coming off an emotional high like last night, but we came in today with great composure and confidence.”

Senior McCall Denny notched 15 kills to lead the Mountaineers in the kills category as well as 15 digs for a double-double, her second on the weekend. Freshman Alyssa McBean posted the team-high in both the aces and digs category, notching two aces and 20 digs. Senior Sarah Missroon posted nine total blocks and junior Sophie Cain led the Mountaineers in assists with 26. Senior Sam Bickley recorded a double-double with 25 assists, the second-most for the Mountaineers, and 14 digs, the third-most on the team.

In the first set, Georgia Southern took an early 8-6 lead, but the Mountaineers steadily fought back with a five-point run that included kills from sophomore Lulu Ambrose and Denny, as well as a solo block from junior Madison Baldridge, a block from the duo of Baldridge and freshman Maya Winterhoff, and an ace from freshman Kenady Roper, which up App State up 11-8. The Mountaineers built off their lead with a 3-0 run that included a kill from Denny and ace from Cain to push the score to 16-12. App State jumped to a 20-14 lead after a 4-0 run that included kills from junior Meghan Dombrowski and Ambrose, and a block from Dombrowski and Missroon. The Black and Gold took the first set, 25-17, after a kill from Dombrowski and an error from Georgia Southern.

Georgia Southern jumped to an early 9-4 lead after a pair of 4-0 runs in the second set. The Mountaineers steadily chipped away at the Eagles’ lead, eventually cutting the deficit to 22-16 after a kill from Winterhoff. App State held GS to three set points, going on a 3-0 run with kills from Baldridge and Denny and a block from Missroon and Baldridge, but the Eagles took the set, 25-19.

To open the third set, App State took an early 5-1 lead, building off kills from Denny, and a block from Denny and Missroon, as well as three GS errors. The Mountaineers’ momentum carried throughout the set as they kept a strong lead, but Georgia Southern began to creep up on the Black and Gold until things were tied at 23 all. A kill from Denny tied the match at 24-24 and an error from the Eagles put the Mountaineers up 25-24. Georgia Southern tied the match at 25-25, but App State took the set, 27-25, with a kill from Ambrose and ace from McBean.

The fourth set was tight, as the Mountaineers and Eagles went point-for-point throughout the match, until GS broke at 10-10 tie and took a 14-10 lead. App State steadily chipped away at the deficit, posting at 3-0 run with a kill from Baldridge, solo block from Winterhoff, and Eagles error to put the Mountaineers within two (22-20). The Black and Gold tied the score at 23-23 with another three-point run that included a block from Baldridge and Winterhoff, an Eagles error, an ace from Winterhoff. The Mountaineers and Eagles went back and forth, tying the score at 24 all, and 25 all, before GS closed out the set, 27-25.

App State came out strong in the fifth and final set, with Denny slamming down back-to-back kills followed by a Georgia Southern error, to take an early 3-1 lead. Georgia Southern responded to edge ahead, 6-5, but App State went on a three-point run composed of two GS errors and a kill from Ambrose to take an 8-6 lead. Georgia Southern tied the score at 8-8, but App State pulled ahead, 11-8, with another 3-0 run with kills from Dombrowski, Baldridge, and Winterhoff. The Black and Gold extended its lead to 13-9 after a pair of kills from Winterhoff and Denny. Georgia Southern responded with two points, but couldn’t overtake the Mountaineers, who clinched the set, 15-11, after a GS error and solo block from Missroon. App State won the match, 3-2.

The Mountaineers will host Louisiana on Nov. 11 and 12 to close out the regular season. Friday’s 6 p.m. match will honor veterans and military personnel for Veteran’s Day. There will also be a rally towel giveaway. Saturday’s 1 p.m. match will have a t-shirt giveaway. The Mountaineers will be recognizing their seniors, Bickley, Missroon, and student assistant coach Morgan Flores for Senior Day on Saturday.