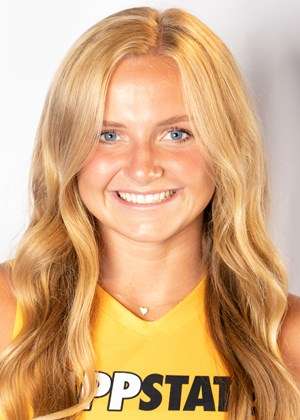 “I’m super proud of how focused we were tonight,” said head coach Sarah Rumely Noble. “We were really efficient and our serve was great. We handled our side of the net at a really high level. I love this team and how hard they fight.”

The Black and Gold will return to the court at 1 p.m. on Saturday for their Pink Match against Marshall. The Pink Match will benefit the High Country Breast Cancer Foundation. The match will be broadcasted on ESPN+.

Sophomore Lulu Ambrose led the Mountaineers in kills, slamming down 11, while senior McCall Denny led the team in aces with three. Fellow senior Sarah Missroon totaled a team-high three blocks. Leading the Black and Gold in the assists category was junior Sophie Cain, who recorded 19, and freshman Alyssa McBean posted a team-high of 12 digs.

Down 2-1 in the first set, App State went on a 4-0 scoring run to lead 4-2. A kill from Denny started the Mountaineers on a 3-0 run to bump the score to 9-6. Shortly after, kills from Missroon, Ambrose, and an ace from McBean pushed App State’s lead to 12-7. Another 4-0 run that included back-to-back kills from Ambrose as well as junior Meghan Dombrowski put the Black and Gold up 16-10. Two consecutive kills from Denny followed by an ace from Cain, pushed the score to 22-14. The Mountaineers took the first set 25-17, after back-to-back kills from Ambrose and freshman Maya Winterhoff.

App State found momentum in set two, breaking a 3-3 tie with a kill from Missroon and going on a five-point run that included an ace from Denny, another kill from Missroon, and a kill from Ambrose to take a 7-3 lead. The Mountaineers built off their success with a pair of 5-0 scoring runs to create a 22-8 deficit for the Herd. Ambrose landed a kill to take the second set, 25-10, for the Mountaineers.

In the third set, Marshall jumped to a 4-1 lead early, but the Black and Gold steadily chipped away at the lead, tying the score at 6-6 with a kill from Cain, which was promptly followed by a pair of kills from Winterhoff and one from Ambrose to push the Mountaineers ahead, 9-6. The Black and Gold built off a trio of 3-0 runs to extend the lead from 14-8, to 17-9, and then to 20-10. Marshall managed to record a block before App State scored five in a row, which included a kill from junior Madison Baldridge, two kills from Ambrose, and a block from Missroon and Baldridge to take the set, 25-11, and the match, 3-0.