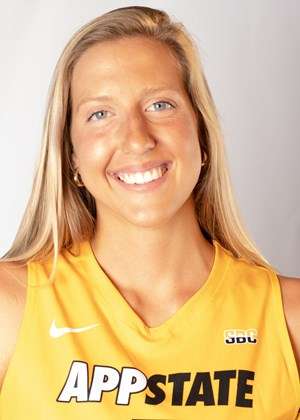 The App State volleyball team fell short in a five-set thriller to Western Carolina in the afternoon matinee at the Virginia Tech Classic on Thursday.

“I’m proud of how we executed our game plan and how efficiently we played. We just came up short,” said head coach Sarah Rumely Noble. “Western Carolina is a great team with some great wins on the year already and we were toe-to-toe with them and competed at a high level. We’ll be ready to get back at it tomorrow.”

The Mountaineers return to the court on Friday at 3 p.m. and will face Norfolk State.

App State led Western Carolina in blocks (17-6) and matched the Catamounts in digs with 74 each.

The Mountaineers maintained a tight lead through the first set, managing to break away from a 16-16 tie after three Catamount errors. A kill from sophomore Lulu Ambrose and another WCU error put the Black and Gold up 20-17. App State squared away the first set, 25-21, after a block from Missroon and junior Madison Baldridge, a kill from Missroon, and a service ace from senior Sam Bickley.

App State came out hot in the third set, posting five unanswered points that included kills from Winterhoff and Denny, a block from Winterhoff and Baldridge, and an ace from Huntley, to take the lead, 5-2. App State, leading 13-10, went on a six-point run with kills from Cain, Baldridge, and Denny, as well as blocks from the duo of Missroon and Baldridge and Denny and Missroon. Up 22-13, the Mountaineers capped the third set with three more consecutive points to take set three, 25-13.

The Mountaineers fought through a tight fourth set, going point-for-point against the Catamounts, only allowing WCU a three-point lead before catching back up. Tied at 22 all, WCU found the momentum to score the final two points to take the set, 25-23.

WCU took a swift lead in the fifth and final set. Down 9-6, App State managed to get within one with a back-to-back kill and solo block from Denny. The Mountaineers managed to tie things up at 12 all after kills from Missroon and Ambrose. With the score 14-12, Missroon managed one more kill before the Catamounts took the set 15-13.