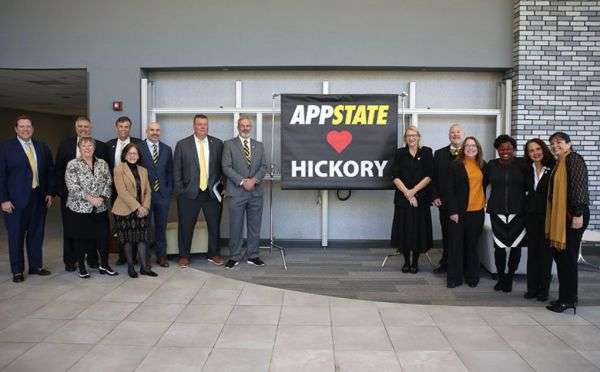 On Friday (November 19) Appalachian State University announced the purchase of a 225,800-square-foot building to establish the App State Hickory Campus in the state’s largest metro area without a public university.

The former Corning Optical Communications building at 800 17th St. NW in Hickory is five stories and is larger than any building on App State’s Boone campus. The building sits on 15.7 acres of land and features large open spaces, a cafeteria and nearly 700 parking spaces.

Recognizing that App State’s growth potential in Boone is limited, the university has been looking for areas that have growth capacity and market potential for both on-campus and online programs. The Hickory-Lenoir-Morganton Metro Area — with a population of more than 370,000— was identified as the largest metro area in North Carolina without a state university presence.

The future App State Hickory Campus has frontage along U.S. Highway 321 and is located less than 2 miles from the Hickory Regional Airport and 4 miles from Interstate 40. The campus is close to downtown Hickory and two regional hospitals and is only a short drive from the second North Carolina School of Science and Mathematics campus, which is slated to open next fall in Morganton.

Positioning an App State campus in the Greater Hickory area aligns with University of North Carolina System Strategic Plan priorities and with the myFutureNC goal of ensuring that 2 million North Carolinians have a high-quality credential or postsecondary degree by 2030.

Prior to the announcement, the university’s deans toured the building with the chancellor and Provost and Executive Vice Chancellor Heather Hulburt Norris. In the coming weeks and months, conversations will continue with the Hickory community and Appalachian State Officials will seek additional input from the university’s academic leaders to determine best options for program offerings and utilization of this much-needed space.

In addition, an audit of the building will be performed to assess energy and efficiency needs, as well as opportunities to advance the university’s sustainability mission. No specific date was announced for the opening of Hickory’s campus.

A Clemmons man was killed in a crash in Burke County. The man killed in…