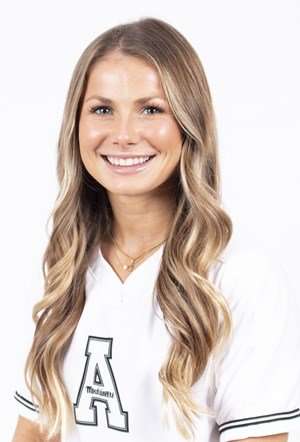 A trio of two-out runs in the top of the first inning propelled the App State softball team (26-18, 8-9 Sun Belt) to a 4-1 victory over conference-leading Louisiana (32-11, 15-4 Sun Belt) on Friday evening. The Mountaineers claimed their first win over the Ragin’ Cajuns in program history.

The App State defense was put to the test early. Buckner worked out of a two-on, no out jam as Taylor Thorp assisted by making a key double play at third.

In the bottom half of the inning, the Ragin’ Cajuns retired the first two Mountaineer batters before intentionally walking Kayt Houston. App State then loaded the bases and McKenzie McCullen ripped a two-out single through the left side to score Houston and Barnes. Thorp was then hit by a pitch with the bases loaded to walk in a run and put the Mountaineers up 3-0 after the first frame.

After a pair of scoreless innings, Louisiana got on the board in the top of the fourth inning after Karly Heath hit a solo home run to right center to trim the Mountaineers’ lead to two.

App State regained a three-run advantage just one inning later when Emily Parrott smashed a solo bomb over the wall in the left center.

The Ragin’ Cajuns made a late push in the sixth. However, with two runners on base and just one out, Buckner was able to work out of another jam. The sophomore then struck out the side in the top of the seventh to secure the historic victory.

Emily Parrott and Mary Pierce Barnes led the App State offense with two hits each. Parrott also drove in one run and scored once, courtesy of her homer in the fourth. McCullen drove in a pair of runs to give the Mountaineers a lead that they never surrendered.

Delani Buckner tossed the complete game, giving up just one run on four hits. She fanned six batters across seven innings of work.

Eli Ellington and Trey Jernigan were exceptional on the mound for the Mountaineers Saturday, but…