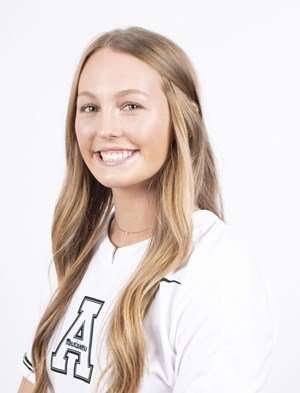 Following the Mountaineers first-ever win against Louisiana in the series opener, the App State softball team (26-19, 8-10 Sun Belt) dropped the second game of the series against the Ragin’ Cajuns (33-11, 16-4 Sun Belt) by a final score of 8-2 on Friday afternoon. The game entered the seventh inning tied 2-2 before six unanswered runs from the Ragin’ Cajuns in the top half of the frame proved to be the difference.

Louisiana opened the scoring early, plating one run in the top of the second inning after a close play at the plate. A single up the middle from Alexa Langeliers, allowed Sophie Piskos to just beat the throw home. After a trio of scoreless innings, the Ragin’ Cajuns doubled their advantage in the top of the sixth via a solo home run from Karly Heath.

The Mountaineers had Abby Cunningham on third with no outs in the top of the fifth inning but were unable to plate their first run of the day. App State got on the board in the bottom half of the sixth when Kayt Houston blasted a two-run bomb, her league-leading 13th home run of the season.

The Ragin’ Cajuns took control of the contest in the final inning of the day. After back-to-back singles followed by two fielder’s choices, Louisiana positioned baserunners and were able to plate a pair of runs to go up 4-2. Piskos then went yard with the bases loaded to cap off a six-run seventh inning and secure the victory for Louisiana to level the series.

Houston led the Mountaineers offensively, tallying three hits on the day while driving in two runs and scoring once. Emily Parrott, McKenzie McCullen and Addie Wray all registered one hit.

For the second time in five days, the Lenoir-Rhyne Men's Lacrosse Team hosted and defeated…