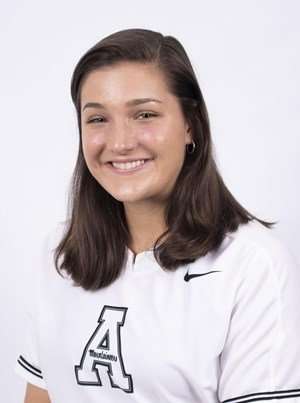 In their final home Sun Belt series of the season, the App State softball team (29-20, 10-11 Sun Belt) picked up a pair of victories over UT Arlington (21-22, 11-12 Sun Belt) in Friday’s doubleheader. A pair of two-run bombs from Mary Pierce Barnes highlighted the Mountaineers’ two come-from-behind victories to secure a crucial series win over the Mavericks.

In game one, UT Arlington opened the scoring in the top half of the third frame. A two-run home run from KJ Murphy capped off a three-run third inning for the Mavericks. A trio of runs in the fifth for the visitors doubled their advantage, putting them up 6-0 after four and a half innings of play.

Despite waiting until the fifth inning to get on the board, the Mountaineers reeled off seven unanswered runs spanning across two innings to rally for the win in the series opener. Starting with a play at the plate, Abby Cunningham came home to put App State on the board. A few pitches later, Kayt Houston registered an RBI-single to score the second run of the inning.

Five Mountaineer runs in the bottom half of the sixth started when Emily Parrott doubled down the right field line to plate Emma Jones. In the next at bat, Parrott came home following Houston’s second RBI of the contest.

The highlight of the game when Barnes belted a two-run shot to deep center field, turning App State’s one-run deficit into a one-run advantage. After Barnes circled the pillows, the Mountaineers never surrendered their only lead in the contest.

A trio of members from the App State pitching staff combined for the victory. Sejal Neas got the start in the opener, fanning three Mavericks across 4.2 innings. Kaylie Northrop stepped in for relief and picked up the win, giving up no runs and striking out one batter in a vital 1.2 innings of work. In the top of the seventh, Delani Buckner stepped in with the bases loaded. She sophomore fired three pitches, a pair of strikes before the third resulted into a double play to end the game.

In game two, as they did in the opening contest, the Mavericks opened the scoring in the nightcap as well. UT Arlington got on the board in the top of the third after a sacrifice fly in left field from Haley Mountain plated Amber Langston for the game’s opening run.

App State responded in the bottom of the fourth after another two-run homer from Barnes, which gave the Mountaineers a lead that they never surrendered. Taylor Thorp helped cap off the three-run fourth inning, driving in Claire Carson with an RBI-single.

A solo shot from Kimber Cortemelia in the top of the fifth halved the Mavericks’ deficit. An immediate response from the Mountaineers came via Parrott’s solo bomb in the bottom half of the frame. The exclamation point came from McCullen when she turned on a pitch, sending it over the left field wall. Her three-run homer capped the scoring at 7-2 and helped ensure the series win for the Mountaineers.

Buckner picked up where she left off in Game 1. After just three pitches in the opening contest, she dealt the next seven innings of the night. The sophomore earned the complete game win, giving up just two runs on four hits while collecting a pair of punch outs.