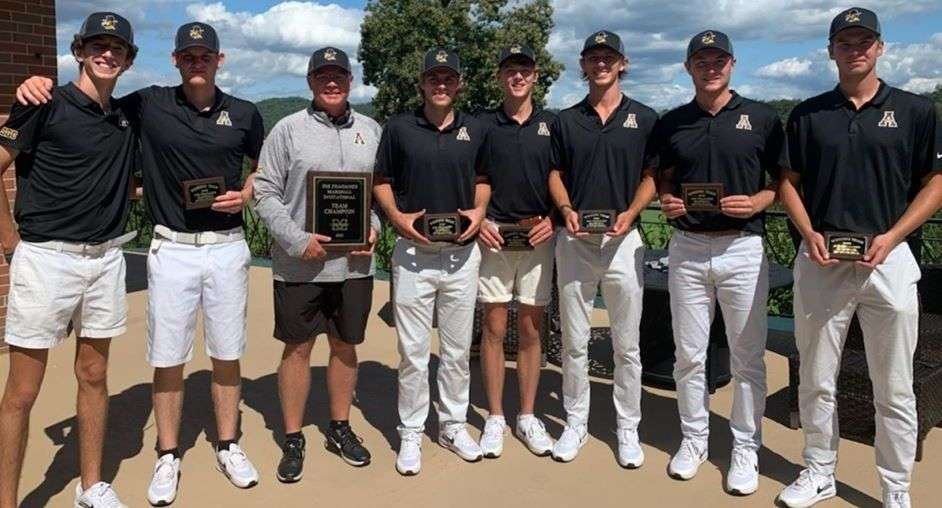 Opening its fall schedule this week, App State Men’s Golf was dominant at the start and resilient at the finish in winning the Joe Feaganes Marshall Invitational. The Mountaineers completed the 15-team, 54-hole event with a 7-under team score of 845, giving them four shots of separation from second-place Marshall.

On Monday, in the first round under the direction of first-year head coach Alan Cress, App State set a program record for lowest team round by recording a 14-under 270, highlighted by a 6-under 65 by true freshman Herman Huus in his first collegiate round.

The work of Huus, Addison Beam, Sverrir Haraldsson, Lukas Jönsson and Colin Browning enabled App State to claim its first team title since it began the 2018 fall season with a victory over six other teams at the Wildcat Fall Invitational hosted by Villanova. A year earlier, the Mountaineers prevailed in a 16-team field at the Patriot Intercollegiate hosted by George Mason.

The Mountaineers took a 13-stroke lead into the final round and endured some struggles that dropped them several spots out of the lead before they recovered in time to regain control.

Redshirt freshman Josh Buxbaum shot a 1-under 70 in his first official collegiate round, and true freshman Aidan Browning shot a 72 with four birdies in Round 2 before closing with a 71.

Huus’ opening-round 65, which left him tied for the lead through 18 holes, included seven birdies and one bogey. That’s tied for the second-lowest tournament round in program history, behind just the 63 that Haraldsson carded during the Bash at the Beach event in the 2022 spring.

Jönsson’s first-round 68 included an eagle, Beam had a bogey-free 68, Browning carded his 69 and Haraldsson also broke par with a 70.

In Round 2, Haraldsson and Jönsson led the team with a pair of 69s, while Browning and Beam had 71s. Remarkably, App State didn’t even need to count the score from Huus, who had the fifth-best second round in the lineup with a 73 but was still tied for fourth place overall through 36 holes.

App State resumes its schedule Monday with the River Run Collegiate at Davidson.