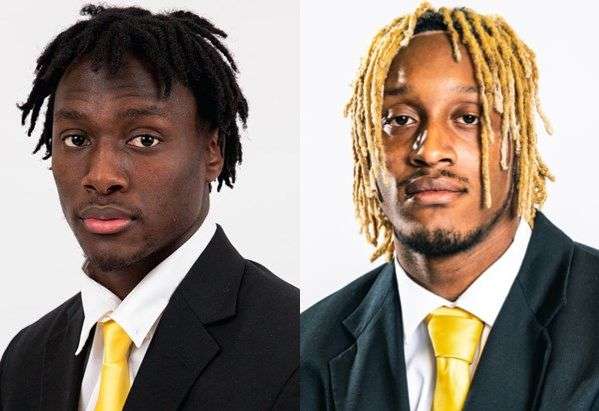 “All I need is a little bit of a push,” he recalled. “And then I felt the push in the back.”

App State center Isaiah Helms delivered one. So did tight end Miller Gibbs. Before long, Peoples was falling forward into the end zone for a statement-making, line-in-the-sand touchdown.

Chilly conditions and an even colder start didn’t stop App State from surging to a 42-17 home win against Georgia State in a nationally televised game Wednesday night on ESPN2. Using a physical running game and havoc-wreaking defense, the Mountaineers (4-3, 2-2) went on a 42-3 run after the Panthers (2-5, 1-3) scored on their first two possessions to claim a 14-0 lead.

Peoples returned from injury to rush for 168 yards and two touchdowns as the Mountaineers totaled 404 rushing yards with six touchdowns on a whopping 64 attempts — the program’s highest total since a 66-rush, 469-yard running game against the same opponent, Georgia State, in 2014.

“It didn’t start off pretty, but we believed in ourselves, and we believed in this program,” head coach Shawn Clark said. “That was a big win for us. Probably the most impressive thing about our team, we found out who we were tonight. With all the outside noise, we played for each other and played for this team. The numbers show it. We played big-boy football.”

Only three of App State’s 41 second-half plays were passes, and five backs rushed for at least 48 yards. Defensively, after Georgia State totaled 157 yards of offense on its first two drives, the Mountaineers limited the Panthers to 144 the rest of the way.

Logan Doublin contributed a career-high 12 tackles and Hampton tied his career high of eight stops. Kevon Haigler combined with Paillant for a sack, and Kyle Arnholt recorded his first career sack before recovering a fumble that he also forced in the closing minutes. Donovan Spellman also had a late sack.

Peoples cut into the 14-0 deficit on a 16-yard touchdown run with 3:13 left before halftime, and Hampton’s two sacks included one in which he forced a fumble to end the opening series of the second half. Paillant recovered the ball at the App State 31, and Peoples’ 20-yard run started a touchdown drive that closed with Marshall’s 37-yard scoring run up the middle on a third-and-8 snap.

“The main thing is we kept our energy going,” said Hampton, who increased his season total to seven sacks and career total to 26.5 sacks — tied for fourth place in App State history. “One play carried over to the next. We stayed together and played as a unit.”

On a drive highlighted by a 31-yard reception by tight end Henry Pearson, Brice gave App State its first lead on his tiebreaking keeper from the 1 with 3:59 left in the third quarter, and McLeod sacked Georgia State quarterback Darren Grainger on the second play of the next series. On third down, with help from McLeod’s pressure, a bare-handed, non-gloved Bird recorded the first interception of his career and returned the ball 12 yards to the Georgia State 13.

Another 1-yard touchdown run by Brice pushed the lead to 28-14 late in the third, and a 47-yard field goal from Georgia State cut the margin to 11 points early in the fourth quarter. Milan Tucker returned a squibbed kickoff 63 yards to the Georgia State 30 to set up Peoples’ second touchdown, and Anderson Castle scored the final touchdown in the closing minutes.

“We like to think we can control the game somehow, and we want it on our shoulders,” Hodges said. “Tonight, the mentality was we wanted to win so bad. There’s was a difference in tonight’s game and our last game in our strain. It wasn’t just a fourth-quarter thing. It was the whole game, and it just started adding up for us. It was just a domination vibe.”

“The line had that grit and that attitude to go out there and attack,” Peoples said. “For me, they just look at me and it’s just do your job. When they do their job like that, it makes my job a lot easier, so I can’t thank those guys enough for the way they came together and the way they kept fighting.”