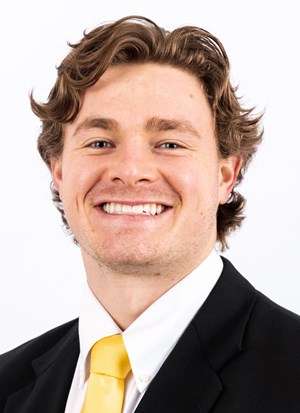 Logan Doublin had 13 tackles for the Mountaineers.
photo courtesy of Appalachian State Athletics

The first Sun Belt Conference game between longtime rivals App State and Marshall went down to the wire, like so many of their past meetings did, and the Thundering Herd held off the Mountaineers to claim a 28-21 win Saturday.

The Mountaineers lost by a touchdown on the road for the second straight game, giving App State four losses by seven points or less this season.

Daetrich Harrington (fourth-and-goal touchdown run immediately after a third-and-goal catch for a gain of 26 yards late in the first half) and Milan Tucker (96-yard kickoff return immediately after Marshall blocked a third-quarter punt for a touchdown) produced big plays to cut 14-point deficits in half.

Chase Brice threw a 14-yard touchdown pass to Henry Pearson on the first play of the fourth quarter to trim the deficit to 28-21, and two final drives into Marshall territory ended with fourth-down stops by the Thundering Herd’s stout defense.

With neither team scoring over the final 14 minutes, a fourth-and-1 stop at the App State 34 from Deshawn McKnight and Logan Doublin gave the Mountaineers possession with 12:32 left. They reached the Marshall 13 before the Thundering Herd stuffed a fourth-and-1 play for a loss with 5:11 remaining.

A third-and-3 stop by Jalen McLeod and Jordon Earle forced one last Marshall punt to the App State 25 with less than three minutes left. Brice’s fourth-and-3 completion to Dalton Stroman for 5 yards to the App State 37 and Brice’s third-and-10 pass to Christan Horn for 13 yards moved the Mountaineers past midfield, but three straight incompletions after a first-down sack sealed the outcome.

Doublin had 13 tackles and one interception to lead App State’s defense, which produced four straight three-and-out stops after Marshall opened the game with a 15-play, 80-yard touchdown drive that consumed nearly seven minutes. Khalan Laborn was limited to 53 rushing yards on 18 carries, but Cam Fancher threw for 225 yards.

Tyler Bird made a key recovery of a muffed punt to give App State a short field in advance of its first touchdown, and Steven Jones Jr. followed a special teams miscue to open the second half with a sack that prevented further damage. In addition to his first career touchdown, Tucker downed two Clayton Howell punts inside the 5.

Offensively, Nate Noel rushed for 72 yards on 18 carries, and Brice completed 15 of his 34 pass attempts for 177 yards. Horn led the way with four receptions for 66 yards.

Marshall had a third-and-9 conversion and a third-and-10 conversion on its first drive, and App State often possessed good field position in the first quarter by following Howell punts inside the 20 with quick stops.

Brice had a short fourth-and-2 pass intended for Pearson from the Marshall 28 knocked down early in the second quarter, but the Mountaineers quickly regained possession when Doublin came down with an interception on a throw tipped by McLeod.

Marshall intercepted a deep throw to the end zone on the next play, and a bubble screen on a third-and-18 pass from the Thundering Herd’s 12 turned into a 71-yard gain that contributed to Marshall pulling ahead 14-0.

App State had to punt again a few minutes later, but Bird’s recovery preceded a 10-play, 32-yard touchdown drive late in the half. A chop block during a 2-yard touchdown run pushed the ball back to the 17, and it moved back to the 27 after a personal foul. Improbably, Brice’s screen pass to a hard-running Harrington resulted in a gain all the way to the 1, and offensive tackle Anderson Hardy helped push Harrington into the end zone on his fourth-down rush.

An offensive pass interference penalty wiped out a chance for Marshall to move inside the App State 5 late and the half, and the Mountaineers had momentum on their side as they received the opening kickoff of the third quarter. A short kick toward the sideline was fumbled away, allowing the Thundering Herd to take over at the App State 30, but Jones’ sack for a 16-yard loss on a trick play led to a punt.

That kick backed App State up to its own 7, and Dainsus Miller recovered Shadeed Ahmad’s blocked punt in the end zone to give the Thundering Herd a 21-7 advantage. Tucker’s quick answer gave App State at least one kickoff return for a touchdown for the fifth straight year, and Marshall responded by marching 82 yards on eight plays for another momentum-changing touchdown.

App State wraps up its home schedule next weekend with a Senior Day game against Old Dominion.