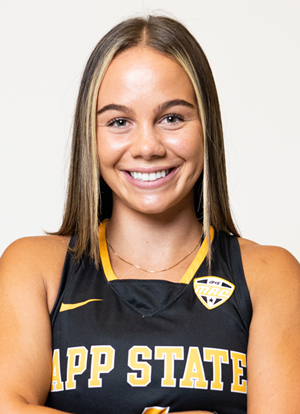 Sarah Farrell and Anna Smarrelli propelled the victory, each netting a pair of goals. These two ate up the box score, earning a combined 13 shots, eight of which were on goal.

Farrell, who has scored four goals in the last two games, set the stage for the outcome in the second minute of the game with a goal that was assisted by Friederike Stegen. That assist was the 25th of Stegen’s career. Last year, she became the all-time leader in assists at App State when she earned her 23rd.

Midway through the second, Smarrelli had a shot on goal that was saved. She rebounded the ball and immediately shot it back to give App State a 2-0 lead heading into the break.

Seven minutes into the third, Farrell followed Smarrelli’s attack by rebounding her own shot on goal for her second goal of the game.

Five minutes later, Pauline Mangold assisted Smarrelli who had the dagger near the end of the third period. This was Smarrelli’s seventh goal of the season and the 15th of her career.

Addie Clark, Grace Ball, Allison Corey, Fien Zwaan and Jillian Orcutt earned their third shutout of the season, defensively. Clark finished with six saves on the night, including three in a row when the Lancers shot aggressively in the fourth period.

The Mountaineers will look to extend their win streak on Sunday as they hit the road to face Saint Louis at 4 p.m. ET. On Monday, they will visit Lindenwood at 2 p.m. ET.