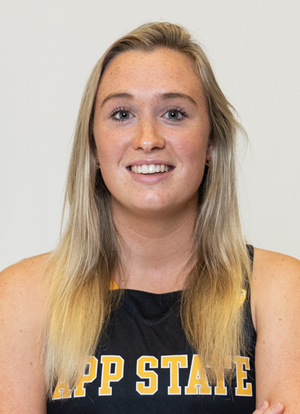 App State field hockey earned its ninth consecutive win and sixth shutout of the season on Sunday by defeating Davidson, 3-0.

Not only is this the second-longest winning streak in program history, but 13 wins ties for the second-most wins in program history. App State went 14-4-4 in 1978 under the leadership of Jan Watson. This is the first time that the Black & Gold have won 13 games since 1981.

12 minutes into the game, Bosma struck first after receiving a pass from Carli Ciocco and dribbling through several Davidson defenders to get open for the goal.

After a long scoring break, Mangold rebounded a saved shot on a corner play and tapped it into the goal, giving App State a comfortable 2-0 lead with five minutes remaining.

Three minutes later, Stegen hit the dagger to end the game thanks to a running assist from Bridget Donovan.

Defensively, Grace Ball, Addie Clark, Allison Corey and Fien Zwaan allowed only two shots in their combined 240 minutes of play, neither of which were on goal.

The Mountaineers will now set their sights on the MAC Tournament that will take place on Friday and Saturday, Nov. 4-5 in Oxford, Ohio. App State will match up with Kent State on Friday at 2:30 p.m. The winner of that game will play against either Miami or Ball State in the championship game on Saturday at 2 p.m.