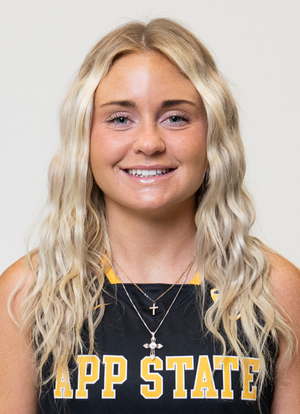 The Mountaineers (12-5, 5-2 MAC) won their eighth straight game and finished regular season play with five conference wins. The longest streak ever was earned during the team’s inaugural season, when the Black & Gold won their last 11 matchups in 1968.

App State will be the No. 3 seed in the tournament, competing alongside Miami, Kent State and Ball State. This is the squad’s first appearance in the tournament since 2019 when they defeated Central Michigan and Ohio before falling to Miami in the quarterfinals.

Henriette Stegen had the game’s opening goal in the 12th minute of the first period. Anna Smarrelli had a shot on goal that was saved and quickly rebounded by Carli Ciocco who dished it to Stegen to give App State the lead.

This was Stegen’s third goal of the season, marking 15 combined goals between the Stegen sisters in 2022. The assist was the 12th of the season for Ciocco, the fifth-most of anyone in the nation. The senior is also now tied for first in App State history in the single-season assists category.

Midway through the third quarter, the Bobcats (8-9, 3-4 MAC) responded with a goal to tie the game, 1-1. The Mountaineers fired off seven shots to Ohio’s one during the next eight minutes in an aggressive attempt to retake the lead, which they did at the 47-minute mark. Three of those seven shots came from Charlotte Bosma.

Sarah Farrell scored an unassisted game-winner with 13 minutes to go to lead App State to victory. This was Farrell’s seventh goal of the season.

Addie Clark, Grace Ball, Allison Corey and Fien Zwaan held back the Ohio offense for the rest of the game, all having played the full 60 minutes on defense. Clark had seven saves, bringing her save percentage to .789, the second most in the MAC.

App State will close its regular season at Davidson on Sunday at 1 p.m. before traveling to Oxford, Ohio to compete in the MAC Tournament on Nov. 4-5. The matchup against Davidson will be streamed live on ESPN+.