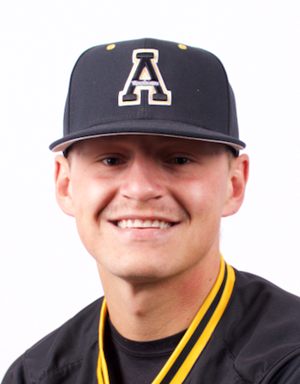 After falling behind 6-0 early, the Mountaineers responded with five straight runs in the middle innings, but they were unable to come through with the big hit, in an 8-5 loss to ULM, Sunday.

Trailing 6-0 after the second inning, App State (13-24, 5-13) was able to climb back into the contest and trim the deficit to one. With one out in the fourth, Dylan Rogers, Austin St. Laurent, and Alex Aguila tallied consecutive singles to load the bases. RJ Johnson then reached on a fielder’s choice to plate the Mountaineers first run. One batter later Andrew Terrell came through with a sacrifice fly to center to make it 5-2.

In the top of the fifth, the Mountaineers again loaded the bases with three straight singles; this time from Hayden Cross, Rogers, and St. Laurent. App State then drew three consecutive bases loaded walks, from Aguila, Johnson, and Terrell to make it a 6-5 ballgame.

Caleb Cross was fantastic for the Mountaineers in relief, tossing a career-high 4.2 innings out of the bullpen, giving up just one run on three hits.

The Warhawks (14-23-1, 6-11-1) opened the ballgame with a solo home run in the first inning from Mason Holt to grab an early lead. Then in the second, ULM plated five runs, propelled by a two-run double, followed by a two-run triple.

ULM added a pair of insurance runs in the seventh inning to make it an 8-5 ballgame.

At the plate the Mountaineers tallied 14 hits, the most against a conference opponent this season, but all 14 hits were singles. App State went just 2-for-10 with runners in scoring position, stranding 14 baserunners on the afternoon. Andrew Greckel, Rogers, and St. Laurent all notched three-hit games.

The Mountaineers still capture a series win, their fourth of the season, and second of Sun Belt play. App State returns home on Tuesday to face the Davidson Wildcats in an in-state showdown, with first pitch set for 6 p.m. at Smith Stadium.