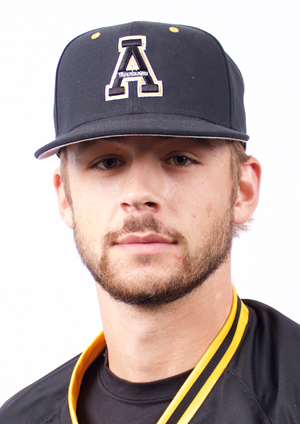 Jacob Whitley had the game winning hit for the Mountaineers with two on and two out in the bottom of the ninth inning.
photo courtesy of Appalachian State Athletics

With two on, and two out, in the bottom of the ninth inning, and the Mountaineers down by a run, Jacob Whitley lined a pinch-hit single into right-center field, to give App State a, 10-9, walk-off victory over Davidson.

Entering the home half of the ninth inning trailing for the first time since the third inning, the Mountaineers put together some great at-bats to begin the rally. With one out, Andrew Terrell worked a full count walk, and after advancing to second on a wild pitch, Luke Drumheller also drew a free pass with a full count. After a groundout from Andrew Greckel moved both runners into scoring position, head coach Kermit Smith called on Whitley to pinch hit. On the first pitch he saw, Whitely lined the ball over the head of the Wildcats second baseman, sending the Mountaineers rushing out of their dugout to mob Whitley as he touched first base.

The walk-off single was the Mountaineer’s tenth hit of the ballgame, and it sealed the comeback win after the team surrendered the lead by giving up six runs in the top half of the frame. App State (14-24, 5-13) has now won three of their last four games, including tonight against a Wildcats (31-8, 10-2) team that came into the contest winners of nine of their last ten games.

App State led for the majority of the contest, highlighted by a four-run fifth inning. The Mountaineers loaded the bases on singles from Hayden Cross and Alex Aguila, followed by a walk to RJ Johnson. Cross scampered home to score a run on a wild pitch, and after Terrell walked to re-load the bases, Drumheller singled to plate two more. Greckel followed with an RBI single to make it a 7-3 ballgame.

The Mountaineers got out to an early lead in the first inning when Greckel lifted a sac fly to score Terrell, who reached on a single to open the frame. After giving up a pair of runs in the top of the third, App State re-gained the lead in the home half of the frame thanks to a two-run single from Cross. Greckel also plated a run in the seventh with an RBI groundout.

Shane Roberts collected the win in relief, retiring the final batter in the top of the ninth inning. Austin Primm worked 1.2 scoreless innings in relief for the Mountaineers and did not surrender a hit, while Trey Jernigan struck out three in 2.1 scoreless innings of work.

The Mountaineers are back in action Friday at 6 p.m. when they open a three-game weekend series against Louisiana.

The App State baseball team got home runs from Luke Drumheller and Andrew Greckel, but…