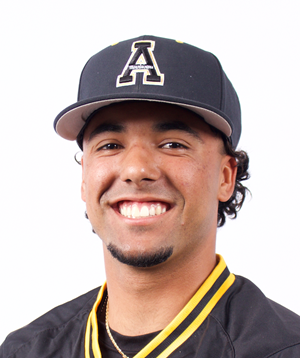 Alex Aguila had the lone run for the Mountaineers.
photo courtesy of Appalachian State Athletics

App State was unable to overcome a big fourth inning from the Georgia State offense Friday night, falling 12-1 in the opening game of a three-game set at the GSU Baseball Complex.

The Panthers (26-21, 11-11) did the majority of their damage in an eight-run fourth inning, in which they sent 11 men to the plate. As a team they hit for the cycle in the inning, capped by a two-run homer to left field from Caleb Stewart, to make it a 12-1 ballgame.

The Panthers opened the ballgame with three runs in the first inning, and added one more in the third.

App State (15-27, 6-16) scored their lone run in the top of the third inning. Alex Aguila began the frame with a single to left, and two batters later Luke Drumheller reached on an error to put two men aboard. Andrew Greckel then loaded the bases with a single through the left side. With two outs, Hayden Cross drew a walk to force Aguila in to score from third base.

After a challenging start to the ballgame, the Mountaineers finished strong on the mound. Seth Whitley fired 2.1 scoreless innings in relief, without allowing a hit. Shane Roberts followed by striking out two in the seventh inning, and stranding the bases loaded in a scoreless frame. Cy Smith then followed with a pair of strikeouts in the eighth inning, retiring the Panthers in order.

Lenoir-Rhyne's Megan Robb has been named a Second-Team All-Conference performer in women's golf, the South…

Despite falling behind 4-0 in the first inning, the Mountaineers rallied, scoring the next 10…