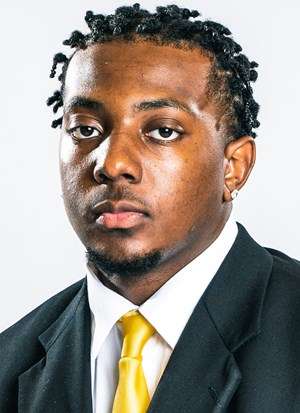 For the sixth straight year, an App State Football standout has made the “Freaks List” produced by Bruce Feldman of The Athletic.

Outside linebacker Nick Hampton comes in at No. 84, making him the highest-ranked Sun Belt Conference defender on the list. Listed at 200 pounds as a freshman, the 6-foot-3 Hampton is now at 240 pounds as he heads toward the start of the 2022 season with 19.5 career sacks and 30.5 tackles for loss to his credit.

Those totals rank first among returning Sun Belt defenders, and his 11.0 sacks in 2021 rank sixth among returning FBS defenders. Hampton was one of only five FBS players last season with more than 10 sacks, 15 tackles for loss and 65 tackles.

“He seems to live in the opponent’s backfield. Hampton has 19.5 career sacks and 30.5 TFLs and has really developed since coming to App State in 2018, when he weighed 200 pounds. Now, he’s an imposing 6-3, 240 pounds who incline-presses 365 pounds; sumo deadlifts 600; can broad-jump 10-6, vertical 39 inches and hits 21 mph on the GPS. His flying 10-yard sprint time is 1.20. “Nick’s strength levels are through the roof,” said App State strength coach Brad Bielaniec. “I have trouble putting exactly into words what he’s capable of in terms of power. His ability to produce exponential power at any point and time is what really separates him from the pack.”