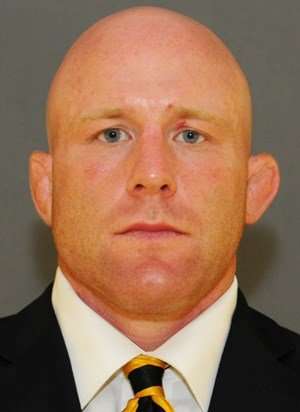 JohnMark Bentley has been the head coach of the Mountaineers wrestling team since 2009.
photo courtesy of Appalachian State Athletics

App State Wrestling head coach JohnMark Bentley has received a contract extension through 2027, Director of Athletics Doug Gillin announced Thursday after it was approved by Chancellor Sheri Everts and the Appalachian State University Board of Trustees.

Last month, Bentley became a three-time national coach of the year finalist after leading the Mountaineers on an unbeaten run to a Southern Conference championship and a top-30 finish at the NCAA Championships.

“I am extremely grateful for the support and confidence that the Board of Trustees, Chancellor Everts, Doug Gillin and Jonathan Reeder have shown me,” Bentley said. “It is an honor to coach at this great University, and I’m excited to continue building upon the recent success of App State Wrestling.”

With a career record of 122-73-1 in 13 seasons, including a 71-15 record in SoCon duals, Bentley has directed App State to five SoCon regular-season titles in the past seven seasons and been named SoCon Coach of the Year a record-tying five times in his career.

A native of nearby Newland, N.C., Bentley also was named a national coach of the year finalist in 2018 and 2012.

“We are excited to have JohnMark continue to lead our wrestling program,” said Reeder, App State’s Deputy Athletics Director. “The success App State Wrestling has had under his leadership has been impressive, including strong academic performance, a championship season and top-30 team finish at the 2022 NCAA Championships.”

App State’s 51-5 conference record over the last eight seasons ranks among the six best league records in Division I wrestling during that span, and returning standout Jonathan Millner has earned All-America honors in each of the past two seasons. Millner was one of the Mountaineers’ five NCAA qualifiers in 2022, with four advancing to Day 2 and combining for eight victories in Detroit.

In the last eight years, Bentley’s program is 66-7 against non-Power Five Conference opponents with eight victories against teams from Power Five leagues.

The Mountaineers have totaled 50 NCAA qualifiers in Bentley’s first 13 seasons and five All-America honors in the last decade. They went 9-2 overall as a team and 7-0 in SoCon duals during the 2021-22 season, highlighted by a 19-13 home win against Campbell in a dual that decided the league title.

A crowd of more than 1,200 fans attended the season-opening home dual against NC State, contributing to App State Wrestling setting a program record for ticket revenue this past season.