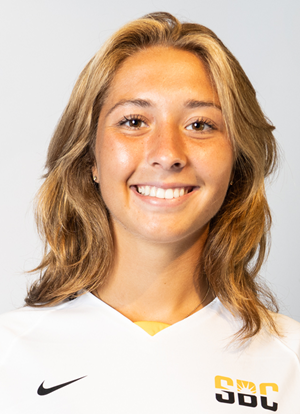 Shannon Studer had the Mountaineers only goal in the contest.
photo courtesy of Appalachian State Athletics

Picked to finish 13th out of 14 teams in the Sun Belt to begin the season, App State more than doubled its conference win total from 2021, and battled to the final whistle in the opening round of the conference tournament, before ultimately falling 2-1 to Marshall.

The 110 minutes needed to decide a winner between the 7th-seeded Mountaineers and the 10th-seeded Thundering Herd was indicative of how even the match was throughout. App State out-shot the Herd 15-14, and the teams were tied with five shots on goal apiece. It was also a physical match throughout, with the teams combining to be whistled for 47 fouls and five yellow cards.

Shannon Studer capped a stellar freshman campaign with her third goal of the season in the final minute of the opening half. It was initiated by a free kick from Skyler Walk, who served the ball into the box before Mumu Guisasola redirected the ball to Studer for the finish.

Marshall evened the score in the second half when Makai Laguines was able to put away a goal on a counterattack in the 59th minute.

Both teams saw quality opportunities over the duration of regulation. Breckyn Monteith finished with four shots and two on goal for the game, while Izzi Wood added three shots and one on target.

Less than two minutes into the first extra period, Kat Gonzalez curled a ball into the top right corner to put Marshall in front, 2-1.

Seven Mountaineers played over 90 minutes in the contest with Studer, Walk, Monteith, and Olivia Cohen playing all 110 minutes.

Kerry Eagleston recorded three saves in her final start in goal. She concludes her App State career with 352 saves and 18 shutouts, both marks rank third in program history.