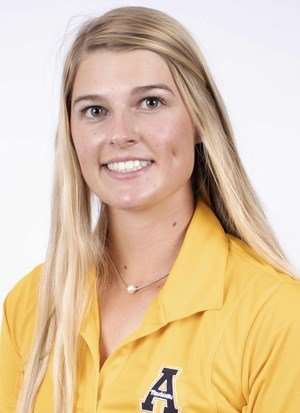 Mary-Sears Brown fired a two under in the final round to finish tied for 18th at the Sun Belt Tournament.
photo courtesy of Appalachian State Athletics

App State Women’s Golf started and closed the 2022 Sun Belt Championship in strong fashion, as the Mountaineers had a noteworthy team score and individual round on the final day of the 54-hole event.

App State freshman Mary-Sears Brown posted a 2-under 70 on Tuesday to give her the best final-round score in the entire field and allow her to finish in a tie for 18th place thanks to a 28-spot jump over the last 18 holes.

Brown led the way as the Mountaineers posted a final-round team score of 303 (15 over) — the fourth-best score of the day — during a 10th-place finish in the team standings, just one shot behind eighth place. They were in fifth after Day 1 thanks to a first-round 301, and only six teams had a combined total lower than 604 when adding up their two best rounds.

Brown matched App State’s best-ever score in a Sun Belt Championship round and finished one shot behind the school record for the best single-round score of 69. She played her first 16 holes in 4 under and completed the round with five birdies, including four in a five-hole stretch leading up to her last two holes of the day.

Hannah Wang, who was tied for seventh place after an opening-round 74, and Layla Meric, who shot an opening-round 75, tied for 37th place with 17-over totals. Kayla Ward tied for 47th place, highlighted by a team-best 76 in the second round. She birdied her first hole and made the turn with an even-par 36 that day.

Georgia Southern won the team title with a 31-over total, four shots ahead of second-place Coastal Carolina. They shot 14 over and 16 over, respectively, in the final round.

For the second straight season, the Lenoir-Rhyne Women's Lacrosse Team fell in overtime in the…