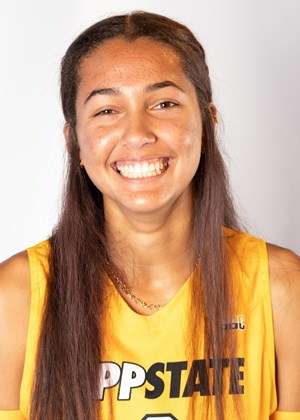 “Despite a tough loss, this team gets better every match we play,” said head coach Sarah Rumely Noble. “We played really hard and went toe-to-toe with a very talented Coastal Carolina team. I’m proud of our fight and our demeanor through the match.”

Three Mountaineers hit double digits in kills, led by sophomore Lulu Ambrose and freshman Maya Winterhoff, who both tallied 13. Senior McCall Denny posted 11 kills on the night. In her first collegiate start, freshman Alyssa McBean notched 18 digs and four aces, team-highs in both categories. Junior Sophie Cain and senior Sam Bickley both hit double digits in assists with 27 and 18, respectively. Senior Sarah Missroon led the team in blocks with a total of seven.

The Black and Gold came out strong in the first set, building off of a kill from junior Meghan Dombrowski and an ace from McBean. With App State leading 11-5, the Chants tried to catch up with a 4-0 scoring run, but the Mountaineers answered with a 4-0 run of their own to extend their lead to 16-10. The Mountaineers went on two three-point runs that included blocks from Dombrowski/Winterhoff and Winterhoff/Denny as well as kills from junior Madison Baldridge and Winterhoff. After kills from Ambrose and Missroon to push the score to 24-15, Ambrose secured the set in favor of the Mountaineers, 25-16.

Coastal Carolina came out strong in the second set with a 3-0 lead before App State got on the board, mirroring their first points of the first set with a kill from Dombrowski and an ace from McBean. The Chants extended their lead to 18-11 after a four-point scoring run. In response, App State went on a 6-0 run that included kills from Winterhoff and Denny as well as a block from Winterhoff/Baldridge, to come within one of the Chants, 18-17. Tied at 20, CCU posted three consecutive points to create enough of a deficit the Mountaineers couldn’t catch up to and took the second set, 25-21.

After two CCU errors to start the third set, Coastal Carolina went on two 4-0 runs to lead 8-4. The Mountaineers went on a 4-0 run of their own to cut the Chants’ lead to 13-9. App State managed to tie things up at 18 all after back-to-back kills from Ambrose and an ace from Winterhoff, but it wasn’t enough, as Coastal Carolina went on a late 4-0 run to take the third set, 25-20.

Entering the fourth set, App State posted an early 6-2 lead before the Chants caught up, tying things at 7-7. Going point-for-point, the Mountaineers managed to break away and post four consecutive points that included kills from Denny, Bickley, and an ace from McBean, to lead 14-11. Tying things up at 18 all with a kill from Winterhoff, the Mountaineers took the lead with a block from Ambrose and Missroon followed by a kill from Ambrose, to push the score to 20-18 in favor of the Mountaineers. App State and CCU went point-for-point again and tied at 23-23 before Denny posted back-to-back kills to take the set 25-23 and push for a fifth-set tie-break.

CCU posted the first point of the fifth set, which the Mountaineers answered with a block from Dombrowski and Missroon. Tied at 3-3, the Chants went on a four-point run to take a 7-3 lead. Down 9-6, App State managed to come within two after a kill from Ambrose before the Chants posted five unanswered points, taking a 14-7 lead. Denny managed to get in one final kill before CCU took the final set, 15-8, and the match, 3-2.

The Mountaineers will travel to Atlanta, Ga. to challenge Georgia State to a pair of matches on Oct. 6 and 7. Thursday’s match is set for 6 p.m. and will be broadcasted on ESPN+. Friday’s match is scheduled for a 1 p.m. start.