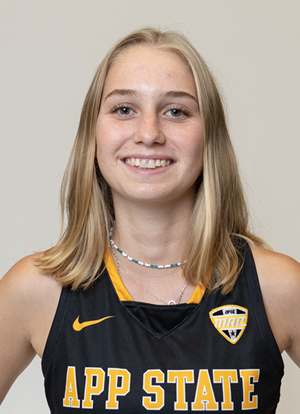 Pauline Mangold scored a pair of goals, and was a trio of Mountaineers to do so.
photo courtesy of Appalachian State Athletics

This was the seventh straight win for the Mountaineers (11-5, 4-2 MAC), which ties the second-longest winning streak in program history, set during the team’s second season (1969). The longest streak was set the year before when App State rattled off 11 straight wins during its first season (1968).

App State’s 10 goals were also the second-most in program history. The Mountaineers scored 13 in a shutout win over Clemson in 1977.

Six different Mountaineers got on the board, including Sarah Farrell, Pauline Mangold and Bridget Donovan who each had two goals.

Farrell set the tone for the afternoon in the 10th minute with a goal that was assisted by Friederike Stegen. Stegen assisted four of App State’s 10 goals, the highest number of assists that she has ever had in a game despite owning the career-assist record at App State, now with 30.

The Royals (0-12) scored the game’s second goal two minutes later before App State immediately responded with a goal from Mangold to close the first period. Mangold now has 20 points on the season, earned by six goals and eight assists.

The Black & Gold owned the last three periods of the game. Rachel Fleig assisted Charlotte Bosma five minutes into the second to increase the lead to two before Anna Smarrelli scored on a corner play that was assisted by Mangold and Allison Corey.

Just before the half, Donovan notched her first goal of the game to make the score 5-1 at halftime.

Farrell tallied her second goal at the end of the third period on a play that Corey and Carli Ciocco assisted. Ciocco now has 11 assists this season, trailing Bridgette Burkhardt by one for the all-time single-season assists record at App State. Burkhardt assisted 12 goals during the 2003 season.

In the fourth period, Grace Ball notched her first assist of the season to Mangold who scored the Mountaineers’ ninth goal. Donovan brought App State to double-digits in the final minutes by way of Boekaar’s assist.

This was the ninth game this season that Addie Clark and the defense allowed one goal or fewer. The senior goalkeeper played the entire fourth period alongside her sister, Ruby Clark, in the backfield, allowing no goals on one shot. Corey and Ball played the entire game on the defensive end, holding back the Royals.

Ines Yofre also had a significant contribution in the midfield, starting and playing 20 minutes for the Black & Gold.

App State will finish its regular season on the road next weekend as the final MAC Tournament standings will be determined. The Mountaineers will visit Ohio (8-8, 3-3 MAC) on Friday afternoon before traveling to Davidson (4-13, 0-6 A-10) on Sunday afternoon.