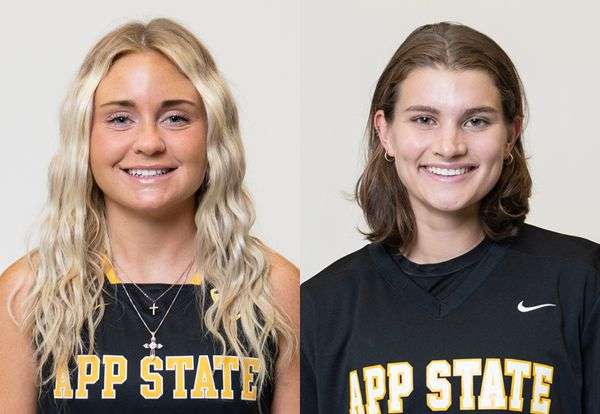 The two seniors were awarded for their efforts in the Mountaineers’ 4-0 win over Longwood and their 2-0 win over Saint Louis last weekend. Both players have been crucial pieces to App State’s current five-game winning streak.

“I’m extremely proud of the work that both of these student-athletes have been putting in to get better on the field and be leaders within our team,” head coach Meghan Dawson said. “This weekend they both performed extremely well to help our team win games.”

Farrell propelled App State to a victory over the Lancers for the first time since 2014 with two goals on Friday night. Farrell scored the first goal of the game in the eighth minute to set the tone for the day. In the third period, the senior scored again on a rebound goal to seal the victory. Farrell was aggressive in both of App State’s wins over the weekend, earning 11 total shots, 10 of which were on goal.

“Sarah has really come into her own the past couple of weeks,” Dawson said. “She has shown how she can be gritty in the circle and challenge defenders and goalkeepers.”

Clark saved every shot on goal that came her way this weekend, leading the Mountaineer defense in two consecutive shutouts. Longwood shot on target six times, including three rapid-fire shots in the fourth period, but Clark allowed nothing to go past her, as she has done four times this season. This is the second time this season that Clark has earned Player of the Week honors.

“Addie has been a consistent force all season in-cage for us,” Dawson said. “She has provided great confidence for our team defensively.”

Farrell, Clark and the Mountaineers will host their last home weekend of the season this week. Ball State will come to town on Friday at 6 p.m. before Queens will visit on Sunday at 1 p.m. Senior day will also be a part of Sunday’s game and both games will be played at Brandon & Erica M. Adcock Field in Boone, N.C.