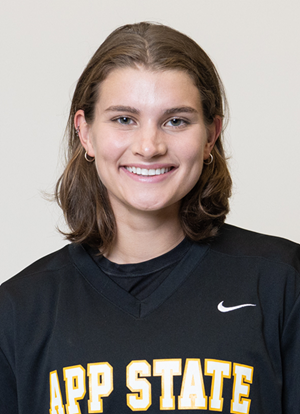 Stegen scored the first two goals of her career this weekend, both at crucial moments in App State’s impressive 1-1 split at home. On Friday, the freshman forward scored for the first time as a Mountaineer to give App State a two-goal advantage in the second period in what would turn out to be the squad’s first conference win of the season against Central Michigan.

On Sunday, No. 15 Wake Forest led by two goals for the entire game until Stegen found the back of the cage with eight minutes remaining, sparking App State’s comeback to force overtime with another goal two minutes later from Rachel Fleig.

“I am extremely pumped for Henriette to share this award,” head coach Meghan Dawson said. “She found her stride this weekend and connected two extremely important goals for our team. Both goals were gritty and she put a ton of pressure on the opponents’ goalkeepers throughout the weekend.”

Clark added to her impressive season with eight saves this weekend. The senior held CMU to one goal on Friday night, allowing the Mountaineers to have a comfortable lead throughout the game and go on to win 7-1.

On Sunday, Clark allowed zero goals in the last 55 minutes of regulation against the Demon Deacons despite facing 14 shots in that time frame, giving App State the chance to force overtime against Wake Forest.

“I am so happy to see Addie get this recognition,” Dawson said. “She is one of the hardest workers on our team and is always resilient, anchoring our defense and making big plays week after week.”

The Mountaineers will continue MAC play this Friday at Miami (OH) at 1 p.m. before traveling back home to host Lock Haven on Sunday at noon.