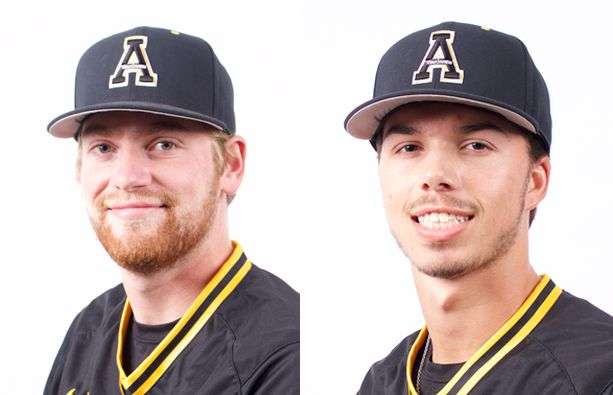 The duo of Eli Ellington (L) and Caleb Cross (R) combined to pitch all nine innings, allowing only one hit and one run.
photos courtesy of Appalachian State Athletics

Eli Ellington and Caleb Cross combined to allow just one hit Saturday afternoon, as the Mountaineers captured a series win with a, 3-1, victory over the UT-Arlington Mavericks at Clay Gould Ballpark.

The one-hitter was the first thrown by Mountaineers’ pitching since March 10, 2019, when Tyler Tuthill, Austin Primm, Evan Mauldin, Bobby Hampton and Will Herman combined to one-hit Furman, in a 14-0 win in Greenville, S.C.

App State (18-28, 9-17) grabbed the lead before Ellington even took the mound. With two outs in the top of the first inning, Austin St. Laurent singled to left field, and Andrew Greckel followed with a bunt single up the third base line. Hayden Cross then walked to load the bases, and Phillip Cole was hit by a pitch to force home the first run of the ballgame.

Ellington retired the side in order in the first inning, and did not yield the game’s first hit until the fifth. Ellington was helped by his defense in the third, when RJ Johnson doubled up a UT Arlington (14-36, 6-20) baserunner who was attempting to advance from second to third base on a flyout to center field.

Ellington struck out three and used seven flyouts and a groundout to work into the fifth inning. He was effectively wild at times, hitting five batters and walking three, but was able to navigate his way around traffic on the bases. He exited with the bases loaded and one out in the fifth, but Caleb Cross was able to minimize damage, giving up a sac fly but no more to preserve a 3-1 lead.

App State tacked on a pair of runs in the top of the fifth. St. Laurent led off the inning with a single to right-center, and then traded places with Greckel on a fielder’s choice. After a walk to Hayden Cross put two aboard, Cole drove in a run with an RBI double down the left field line. Dylan Rogers plated a second run with an RBI groundout to score Hayden Cross.

After getting out of the fifth inning Caleb Cross breezed to the finish line. He earned the win, going a career-high 4.2 innings and allowing just two baserunners, on a walk and an error, while producing 10 flyouts and four groundouts, needing only 54 pitches over the course of 16 batters faced.

The Mountaineers take aim at their first series sweep of the season, Sunday, as they close out their three-game set with the Mavericks at 2 p.m. ET. The game will be broadcast on ESPN+.

1A Draughn: 10 Uwharrie Charter: 5 The Wildcats advance to the second round going to…

With 46 seconds left in regulation, Dylan Stape took a pass from Colten McCracken and…