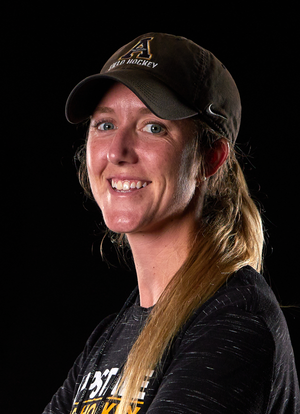 After serving as interim head coach since December, Emily Dinsmore has been named the next head coach of App State Field Hockey, Director of Athletics Doug Gillin announced Tuesday.

App State will hold a press conference on Monday, Jan. 23 on the fifth floor of the Ricks Athletics Complex to introduce Dinsmore. The press conference is scheduled for 4 p.m. and open to media members, staff, students and fans who would like to attend.

Dinsmore, who has been on the Mountaineers’ coaching staff since 2017, helped lead App State to a school record-tying 14 wins and its first MAC championship game appearance this past season. She takes the reins of the program after Meghan Dawson stepped away following eight seasons at the helm.

“We are excited for Emily to be the next leader of App State Field Hockey,” Gillin said. “Emily has been a key member of the program since she arrived in Boone. She is a great competitor and recruiter, and her values align with App State Athletics’ core values. Her connections in the sport of field hockey and her leadership abilities have made her ready to be our next head coach.”

This past fall, Dinsmore’s first after being promoted to assistant head coach, App State won 10 straight contests leading into the MAC final, and the squad came within one goal of defeating No. 16 Duke and No. 15 Wake Forest on the road. The Mountaineers finished the season top 10 nationally in both offense (points per game) and defense (goals-against average).

“I am very humbled and honored to be the next head coach of App State Field Hockey,” Dinsmore said. “I want to thank Chancellor Everts, Doug Gillin, Erika Cheung and the entire search committee for believing in my vision for the program. App State has been my home for the past six years, and this team is my family. We have an incredible group of student-athletes, and it is a blessing to serve them on a daily basis. I can’t wait to lead this team alongside Azure Fernsler as we seek to build upon what we have already accomplished. The future is bright and it’s a great day to be a Mountaineer!”

Dinsmore used her skill at teaching defense to help lead the 2021 team to its first ranked win in program history when the Mountaineers defeated JMU in a 2-0 shutout. In 2019, Dinsmore helped charge App State to its first winning season since 2003. The Mountaineers also opened the 2019 campaign at 6-0, setting a new program best for consecutive wins to begin a season.

Since 2016, Dinsmore has served USA Field Hockey as a Nexus regional coach and is currently the North Carolina State Chapter Coach Chair. She is a level 2 certified coach with USA Field Hockey.

Dinsmore was hired by Dawson as an assistant coach in 2017 after serving two seasons as a graduate assistant coach at Stevenson University, helping lead the Mustangs to a second-place finish in the Middle Atlantic Conference in 2015. That same season, the team advanced to the conference tournament championship and the ECAC Division III Mid-Atlantic Field Hockey Championship final.

She completed her master’s degree in business technology management during her two-year stint at Stevenson. Working primarily with goalkeepers and defenders, Dinsmore also worked in recruiting and as an academic mentor.

A Chesapeake Beach, Md., native, Dinsmore graduated from Liberty University in 2013 with a bachelor’s degree in elementary education. During her time at Liberty, she lettered in both field hockey and lacrosse. In her first season of field hockey, she helped lead the defense to three shutouts as she appeared in 15 of the Flames’ 17 games, making 13 starts.

On the lacrosse field, Dinsmore played in all 18 games in her first season, contributing six goals and three assists. In her second season, Dinsmore moved over to defense and recorded 17 ground balls and 10 caused turnovers.

Prior to her time at Liberty, Dinsmore started her career at Catholic University, where she played one season of field hockey. She was recruited out of Northern High School in Owings, Md., where she was a four-year letterwinner in both field hockey and lacrosse.