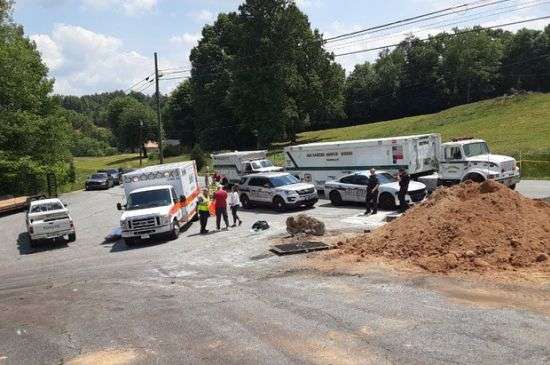 An Alexander County grading company has been fined after an employee was killed earlier this year in an accident at a construction site. 38-year-old Shane Anthony Sharpe of Taylorsville died when a trench collapsed on May 19. Sharpe was an employee of Barnes Backhoe & Grading Inc. of Taylorsville. WHKY reported on the incident on May 20.

At approximately 2 p.m. on May 19, Alexander EMS and Ellendale First Responders were dispatched to Big D’s Diner on US 64-90 west of Taylorsville. A portion of a trench had collapsed and trapped a man. The man was removed from the trench but was pronounced deceased at the scene. The trench was part of a project to replace a large culvert in the parking lot of the business.

The North Carolina Department of Labor has fined the company due to a number of safety measures not being in place at the time of the accident. Barnes Backhoe & Grading was cited for violations of the Occupational Safety and Health Act of North Carolina. The company was fined $39,200 for five violations. The company did not have protections in place against the trench caving in.

Employees were also not trained to recognize or avoid trench hazards or signs of collapse and there was no stairway, ladder, ramp or other safe way for employees to get out of the trench, according to the citation. The company was also fined for employees not wearing visibility vests when working at the trench, which was adjacent to US Highway 64-90 in the Ellendale Community west of Taylorsville.

Reports indicate that Barnes Backhoe & Grading Inc. has requested an informal conference with NCDOL to discuss the penalties. The conference could result in an appeal or lowering of some fines. If fines are paid, they will be part of a state fund that is distributed to North Carolina Public Schools.