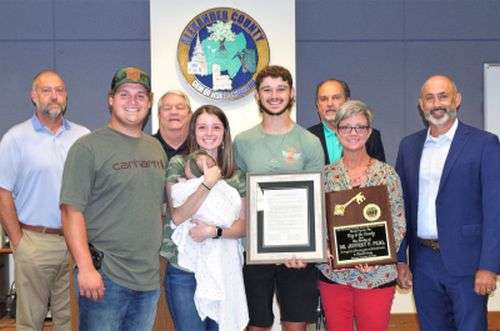 The Alexander County Board of Commissioners honored the family of late commissioner Dr. Jeffrey Peal at their meeting this week. The family was awarded a “Key to the County” and a framed resolution honoring Dr. Peal for his community service at Monday’s (September 20) meeting. Commissioner Peal passed away on July 19 following an automobile accident.

To fill the vacancy on the board, commissioners appointed Kent Herman to complete Dr. Peal’s term through 2024. Per state statute, the Alexander County Republican Party recommended Herman for the position as he was next highest vote getter in the primary election of 2020.

In other business: County Manager Rick French reported that five bids were received for the Alexander Industrial Wastewater project. West Consultants PLLC recommended awarding the contract to Two Brothers Utilities LLC of Shelby, which submitted the low bid of $84,929.68. Commissioners unanimously voted to award the contract to Two Brothers Utilities.

Commissioners approved a resolution to join the North Carolina Opioid Litigation Settlement agreement. The settlement is expected to bring approximately $850 million to the state over an 18-year period to support state and local efforts to address the opioid epidemic. Alexander County is estimated to receive more than $3 million from the settlement that can only be used to address the opioid epidemic in the county.

Commissioners held a public hearing to discuss the 5310 grant for “Enhanced Mobility of Seniors and Individuals with Disabilities” for fiscal year 2022-2023. Leeanne Whisnant, Consolidated Human Services Director, presented information about the grant which totals $194,592 ($155,673 federal, $19,459 state, and $19,460 local funds). The Alexander County Department of Social Services plans to continue utilizing the services of Greenway Public Transportation for this program.

Commissioners held a public hearing to review proposed changes to the zoning and subdivision ordinance. Ashley Kale, Senior Community and Regional Planner for the Western Piedmont Council of Governments, presented the 160D legislative updates to the board. The majority of the changes are mandated by the state. The board unanimously approved the changes. Commissioners Marty Pennell and Josh Lail also expressed a need to examine the county’s current zoning rules.

The board received an update on the United Way of Alexander County and its current community needs survey. Dr. Dianne Little, president of the United Way’s Board of Directors, presented information about the local nonprofit. She said there is currently no paid staff with nine board members. Dr. Little said they only have the ability to fund 50 percent of the grant requests totaling $26,770 to seven agencies, which include the Alexander County Partnership for Children, Alexander County 4-H, Alexander Rescue & EMS, Alexander County Family YMCA, Alexander County Department of Social Services, The Bridge Community, and the Mobile Cafe. United Way has also begun a “365 Drive” to encourage small businesses to commit to $1 per day or $365 a year. They are also working to develop partnerships with local and regional companies. For more information or to take the survey, visit www.unitedwayalexander.org.

In the County Manager’s report, Mr. French informed the board that the grant is closed for the Stony Point Elementary School Wastewater Project, pending the receipt and approval of the county’s audit by the Division of Water Infrastructure. The project only required $741,863.25 of the $864,750 grant. He also presented information about a $1 billion FEMA program entitled “Building Resilient Infrastructure and Communities” (BRIC). The program would provide funds for planning and shovel-ready projects.