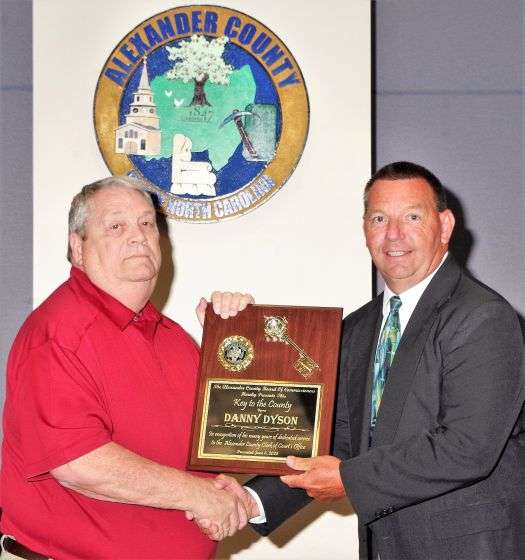 A public hearing was held on Alexander County’s budget, which includes a property tax decrease. The hearing on the proposed 2022-2023 county budget was held at Monday’s (June 6) meeting of the Alexander County Board of Commissioners to allow public comment and discussion. No one from the public offered remarks.

Mr. French said the proposed budget now includes a revision for the Department of Social Services to fund a salary package approved by commissioners on May 2, among other things. The revised budget also includes additional funding for all volunteer fire departments, a quick response vehicle (QRV), and the conversion of a Soil & Water position from part-time to full-time. Also, water and sewer connection fees will increase in January 2023.

The County Manager said he has been in contact with the North Carolina Association of County Commissioners (NCACC) to discuss a proposed ¼-cent local sales tax which would help provide funding to fire departments, rescue squad, and other emergency services. Mr. French said the sales tax request would have to go through a legislative process with consideration during the General Assembly’s long session in January 2023.

Commissioners will hold a budget work session on Monday, June 13 at 5:00 p.m. in the downstairs conference room in the county administration building. The budget is scheduled to be adopted at the June 20th meeting at 6:00 p.m. at the CVCC Alexander Center for Education.

In other business, Commissioners presented a “Key to the County” to Danny Dyson, who recently retired from his position as Alexander County Clerk of Court. Dyson served a total of 36 years in the clerk’s office, with 23 years as Deputy/Assistant Clerk of Court and 13 years as Clerk of Court. Commissioner Larry Yoder presented the award to Dyson, saying, “We appreciate your service to this community. You’ve been an active citizen in many ways and the contributions you’ve made are obvious.”

Cody Bowers, Building Inspector, presented information about a nuisance case at 1078 Willie McLeod Road. Bowers said that two letters were sent to property owner Judy Cale, who lives several hours away, regarding numerous complaints about large amounts of trash in and around the property as well as overgrown vegetation. The first letter was mailed in October 2021. Bowers said he also spoke on the phone with the owner about the issue. Bowers said the condition of the property has not improved following the communications. Commissioners ordered an abatement in 30 days.

Chris Holmes of Harmony, who has been a member of the Harmony Fire Department for…