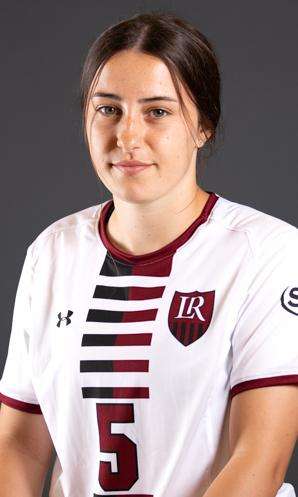 Ria Acton scored the only goal of the contest, on a penalty kick in the second half.
photo courtesy of Lenoir-Rhyne Athletics

On a rainy and wet afternoon in Columbus, Georgia, the Lenoir-Rhyne Women’s Soccer Team opened their 2022 NCAA Tournament with a 1-0 win over Limestone. The Bears got a penalty kick goal from Ria Acton in the 70th minute as the Bears posted their 8th shutout of the year to move on to Sunday’s second round. The Bears will now face off against the winner of Columbus State/North Georgia.

The first half was scoreless as the Bears won the time of possession and had the advantage in shots 7-3 but neither team could find the back of the net. LR came in averaging 5.94 corner kicks a game and surpassed their season average with six chances in the first half but could not break through as Saints keeper Samantha Aquilar-Hopkins made two saves in the first half.

With the rain coming down in the second half, Nicole Auger’s cross drew a hand ball in the box as Acton delivered the PK goal just inside the lower left post to give the Bears the lead. Limestone had seven second half shots as the Bears back line only allowed one shot on goal, which was saved by S.A. Phillips.

Aguilar-Hopkins made eight saves in goal for the Saints. Eight different Bears players had a shot on goal in the contest.

This was the Bears 9th appearance in the NCAA Tournament. LR moved to 5-6-7 all-time in the NCAA Tournament. Out of the 9 trips in the tournament, the Bears have made their way to Columbus five times. Bears are now 3-3 in Columbus and the win snaps a three game losing streak there. The win also was the rubber match between the two programs as the Bears won the regular season meeting in Hickory but Limestone knocked the Bears out of the SAC Tournament just seven days ago but the Bears ended the Saints season.

Acton goal was the senior’s 21st career goal. The game was played in wet conditions as the remnants of Hurricane Nicole soaked western Georgia Thursday night and Friday. The whole second half was played in a steady rain.

Lenoir-Rhyne is 12-3-3. The Bears will advance to the second round and face Columbus State/North Georgia. Kick-off is schedule for 12:00 PM on Sunday.